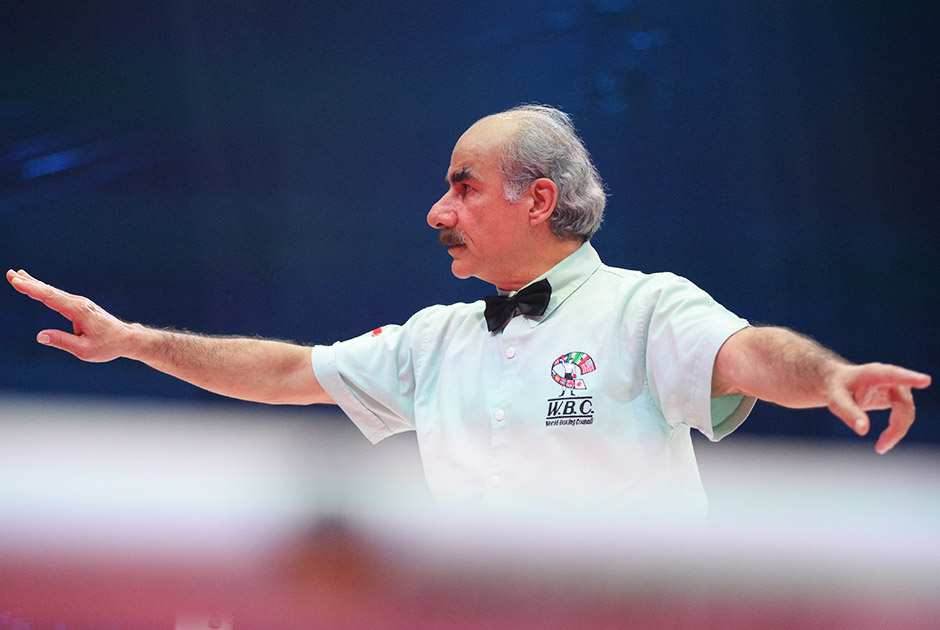 No belt; no watch; no jewelry on hands, wrist or neck; no eyeglasses; nails cut short; boxing shoes with rubber anti-slipping soles; a towel on the neutral corner post

Must be well groomed

Extreme concern for the safety of the boxer.
Strict enforcement of the contest rules.
Move smoothly and efficiently in the ring.
100% concentration.
Use only basic boxing language. Don’t use other words.
Use basic signals.

Not one language is understood or heard by all boxers:

The use of signals for initiating and finishing rounds, terminating fights, to timekeepers and doctors; fouls.

Instruction to Boxers Prior to Bouts

Specific instructions must be given to boxers based  on basic language and basic signals, as well as warnings specifically on: a) no head butts; b) no rabbit punches; c) no kidney punches; d) not hitting below the belt, as well as when they finish during rest periods. STOP FIGHT when the doctor advises to.

Stay away, circling around when boxers are not close to the ropes.

Stay close when they are boxing at the ropes.

Stay very close when the action is in the corners.

Use only basic language and signals.

Do not talk to boxers.

Do not crowd them; Let them fight.

Wait until the cessation of the action that created the loss of a mouthpiece to stop the action to replace it.

A head butt, intentional or non-intentional should be called immediately; in case of an intentional head butt there is a mandatory deduction of two points.

Don’t rush; order or direct the standing boxer to the furthest neutral  corner, take the count from the timekeeper and count out loud showing the count with your fingers to the downed boxer.

If he gets up give him the mandatory 8 count and ask him questions that make him think or use signals to make him walk forward, etc.

Do not hesitate to stop the fight if you have doubts; it’s better to stop a fight one punch before than one punch after.

Hold the boxer and take him to his seconds.

If he goes down with a concussion, don’t hesitate to remove his mouthpiece at once and turn him partially on his left side.

You are the boss, show your authority and, remember, the health and the life of the boxer might be in your hands; safety has no compromise.